The sweet ride back to NZ

When I left the Pole, people told me that I would most likely get a ride on an Airbus from McMurdo to Christchurch. At first I thought I did not hear right, since I could not believe that an Airbus would be able to land on the ice of the McMurdo runway. But the rumors got more frequent, and when I arrived in McMurdo and checked in my luggage again, the rumors turned into fact: We would ride on an Airbus. If that plane would make it to McMurdo weather wise...

A few hours later we learned that the flight was cancelled because of weather, and during the next two days these news were repeated several times a day. After about two days I actually did not believe that the Airbus really existed. But then we got a date and a time, and really, truly made our way to the airfield. We were just in time to see the Airbus arrive. What a show! 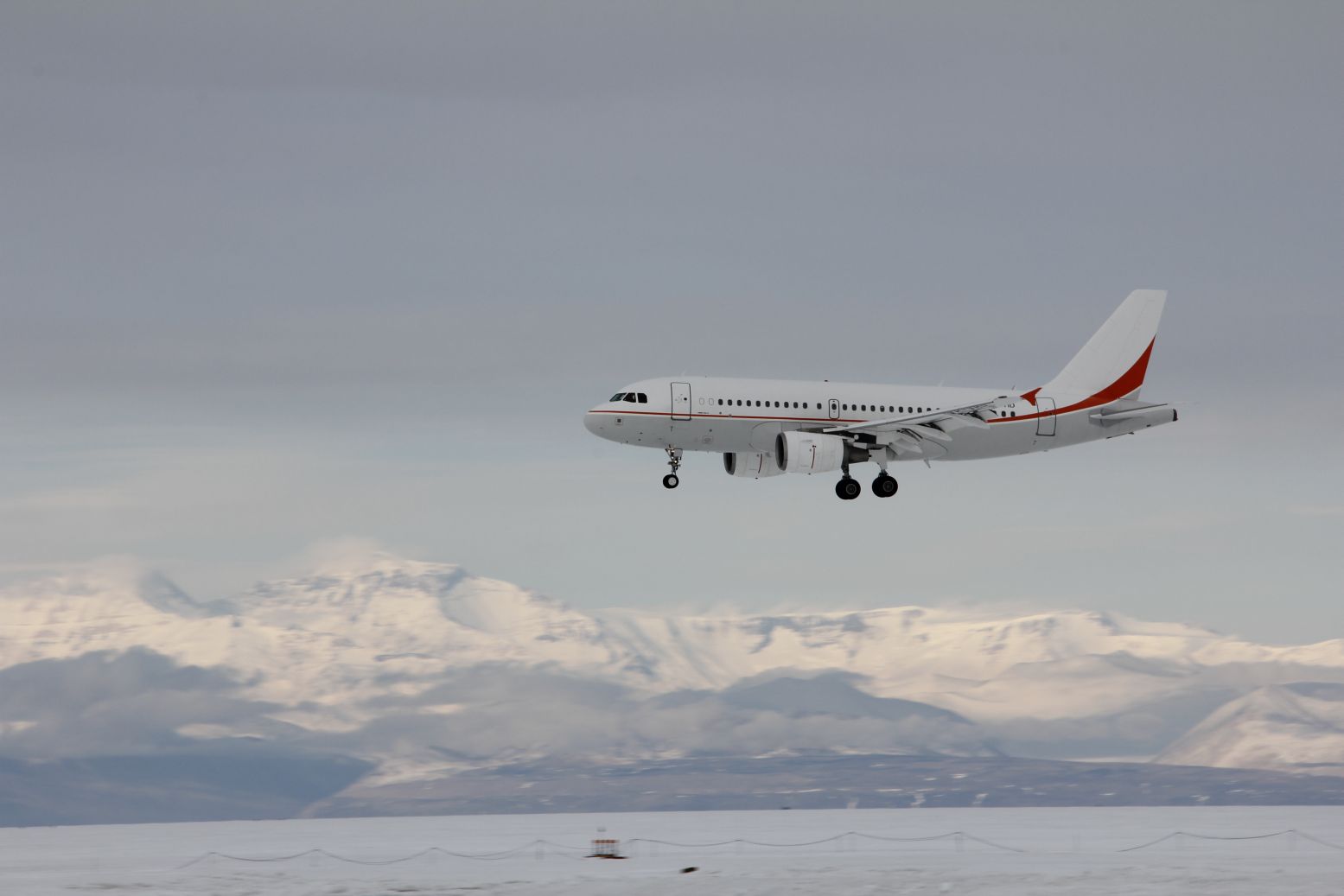 The flight back to NZ was one of the smoothest I had in a long time. We were 18 people on the plane that had at least room for 120. We had four crew members, and two pilots. And since we were only so few, we were allowed to go to the cockpit and take some pictures of the mountains of Victoria Land. Awesome! And the best part: the flight only took 4.5 hours!  :) 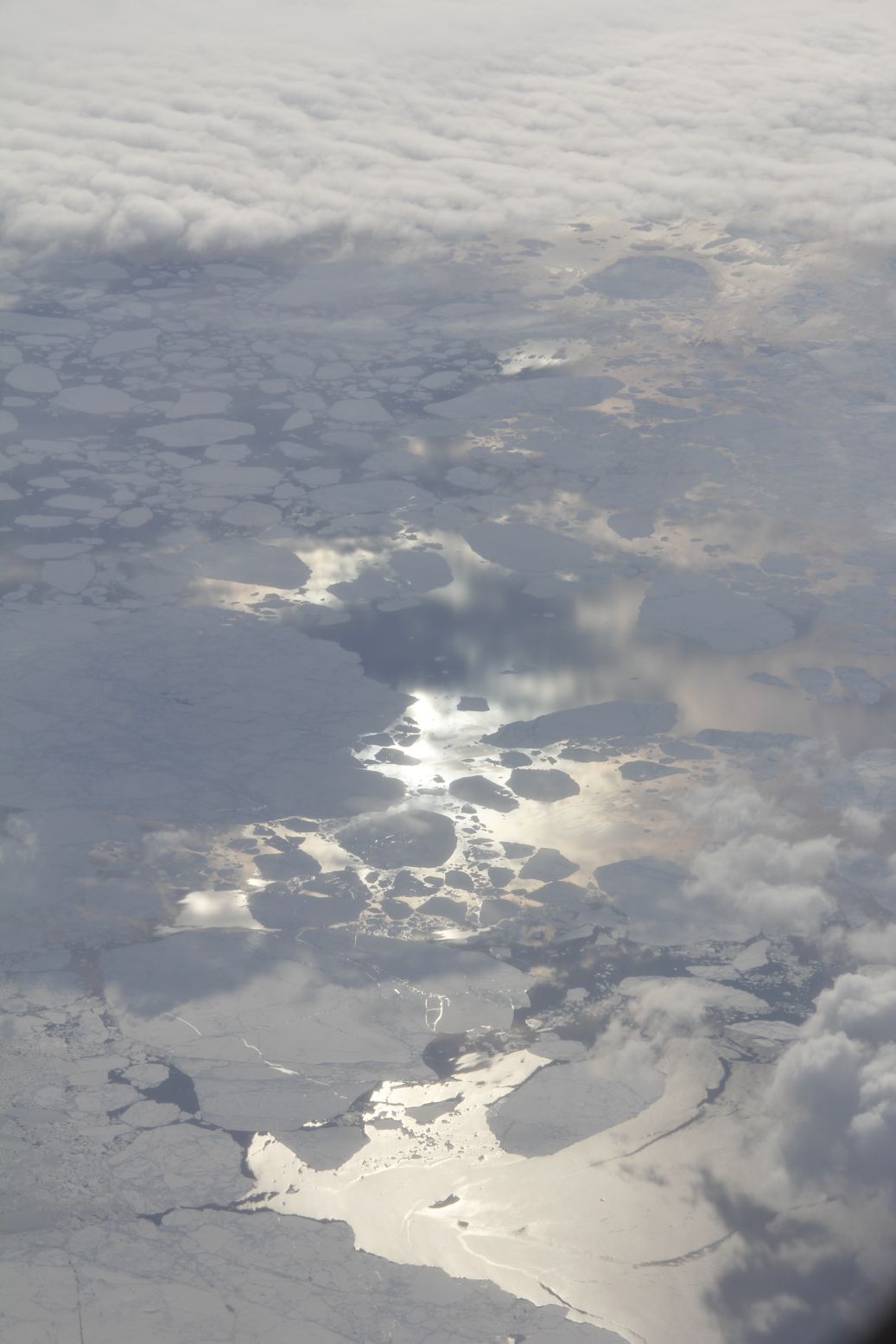 Sea ice and some clouds. 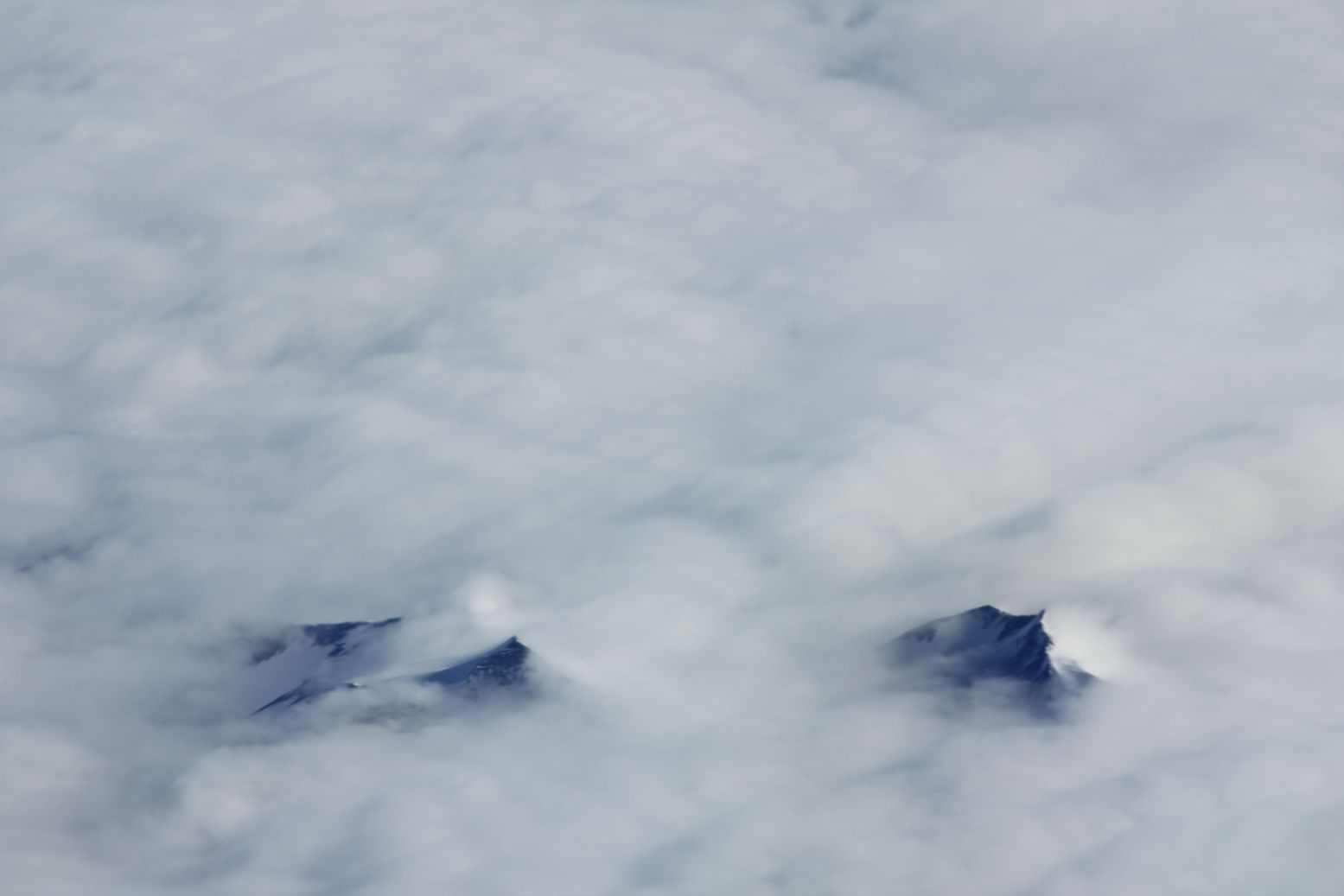 Some peaks of Victoria Land. 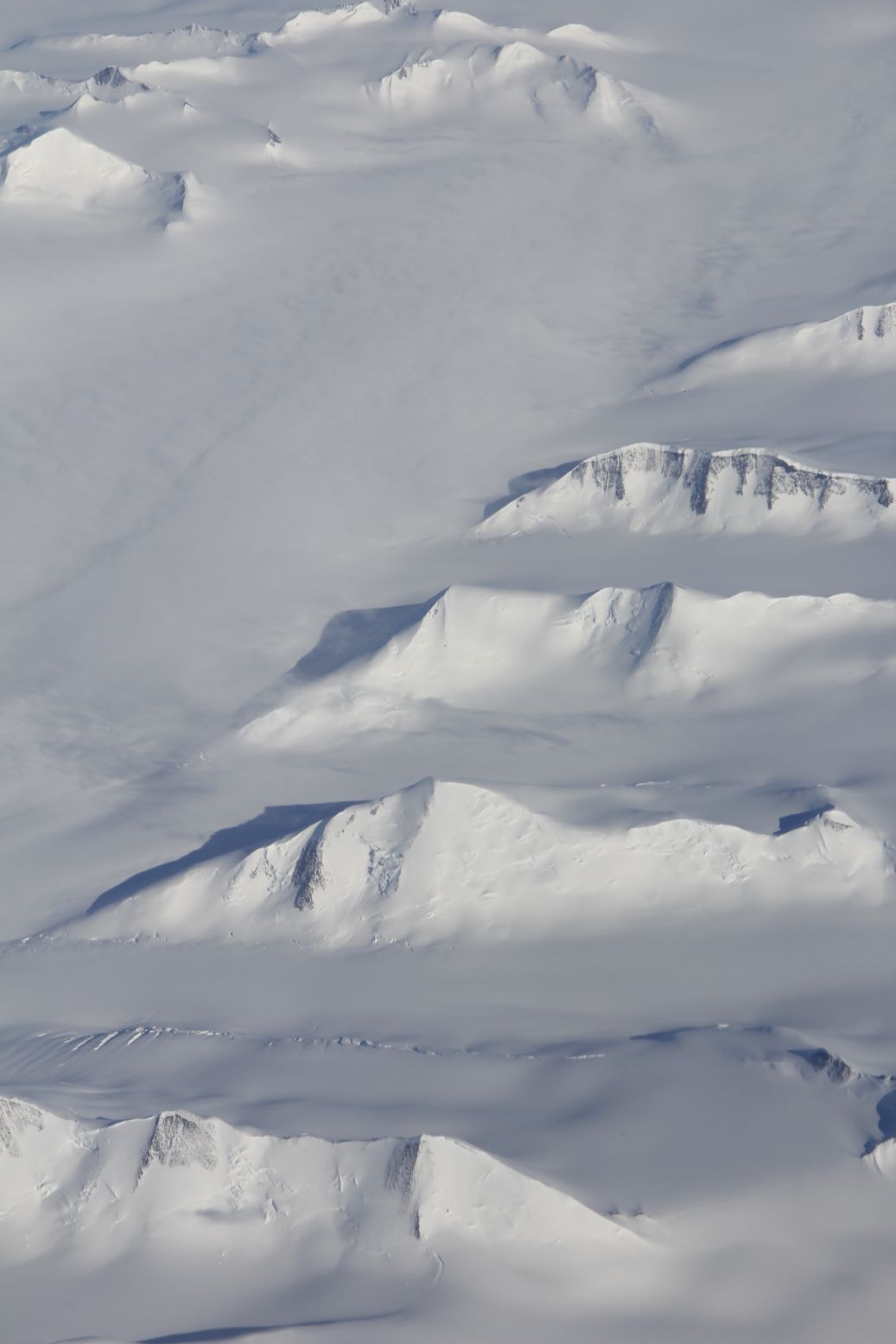 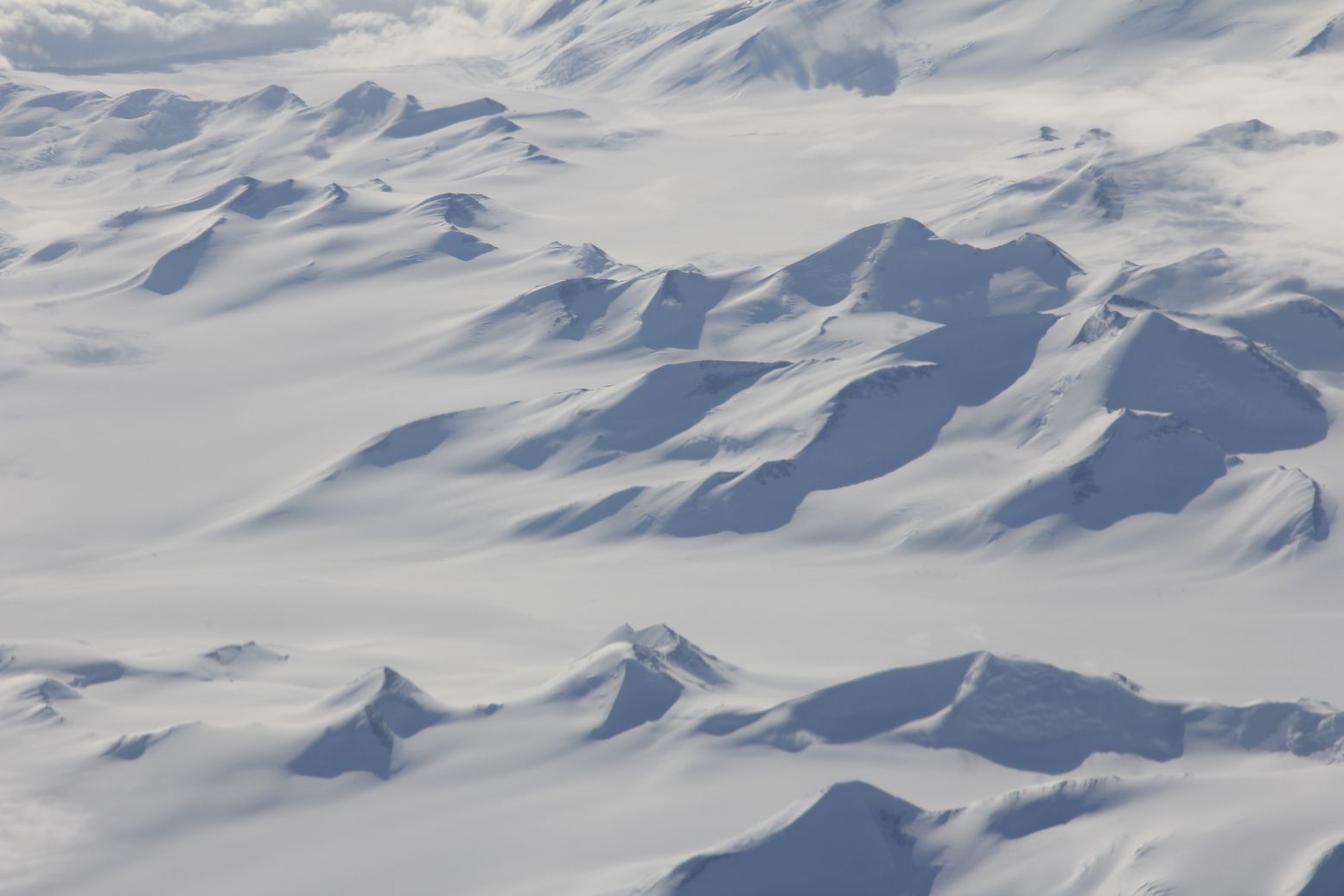 Posted by birgit hassler at 5:29 PM No comments:

Close to Scott Base, the New Zealand Antarctic station, there are pressure ridges. The occur because the ice floes collide with each other and with the shore there. Wikipedia says that "pressure ridges are made up of angular ice blocks of various sizes that pile up on the floes".

When I was getting a ride from the airfield to McMurdo the first time, I saw these interesting ice blocks and desperately wanted to go there to check them out. But on my way to the Pole there was no time. Later I also learned that it is not allowed to go to there all by yourself anyway. Firstly it is dangerous (it is sea ice after all and it sometimes is hard to tell if the ice is strong enough to support the weight of people), and secondly that area "belongs" to Scott Base and therefore everybody from McMurdo has to get permission to go there.

Since I was stuck in McMurdo for two days on the way back to NZ, I tried hard to somehow find a way to go to the pressure ridges during that time. Luckily, I found a recreational tour you could sign up for, and double luckily there was still space left on the tour. So me and one of my colleagues from the Pole decided to join the tour.

We walked in the pressure ridges for about two hours, and it was absolutely incredible. Especially since there were many Weddell seals around which we had to pass really close. That gave us ample opportunity to take close-up seal portraits...  :) 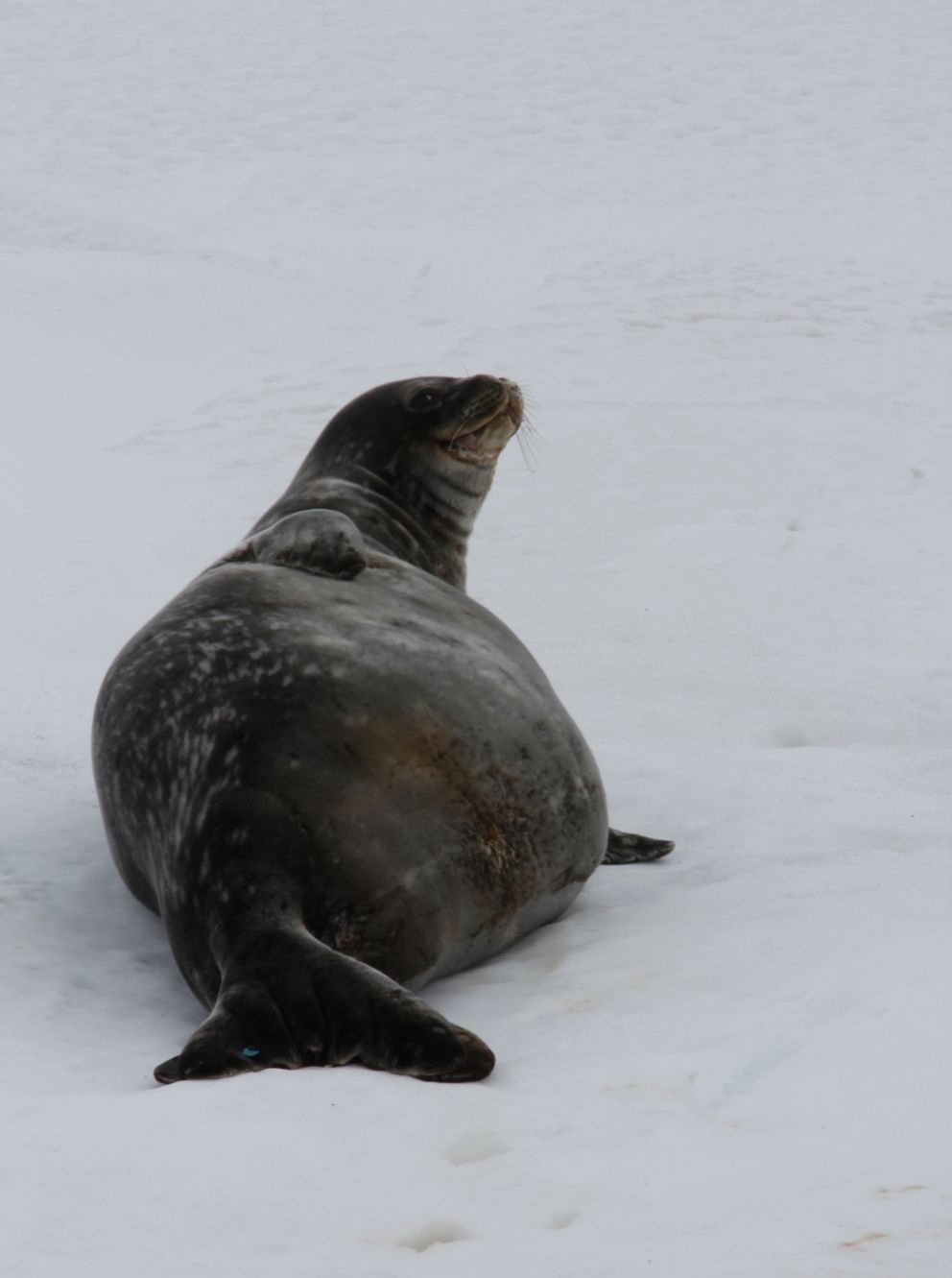 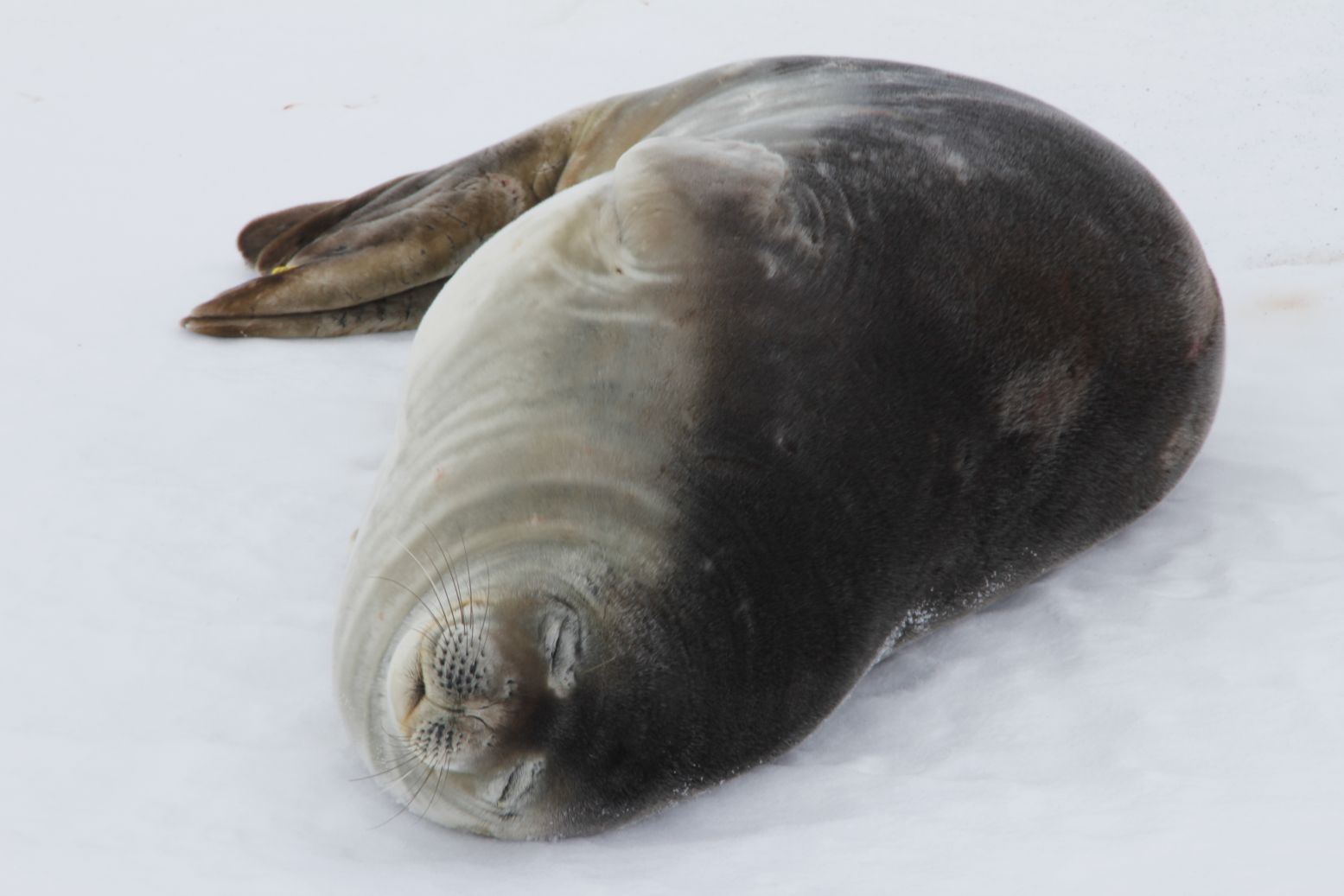 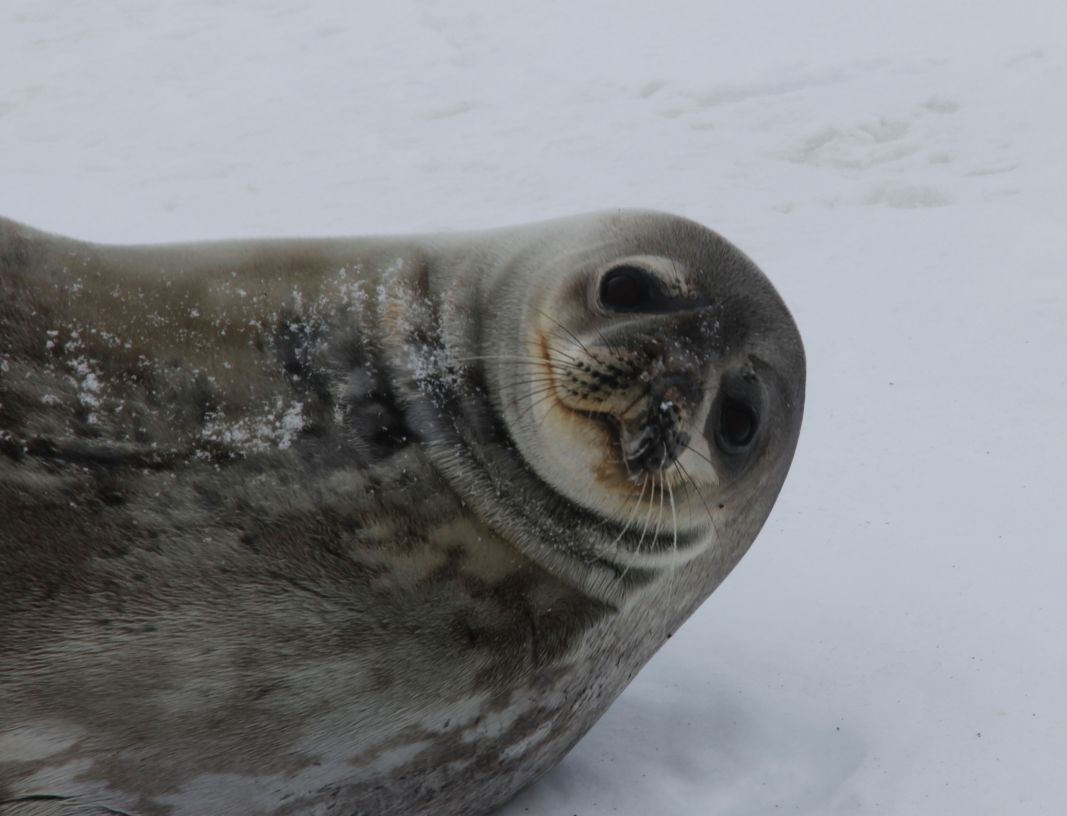 "What the hell are you looking at?" 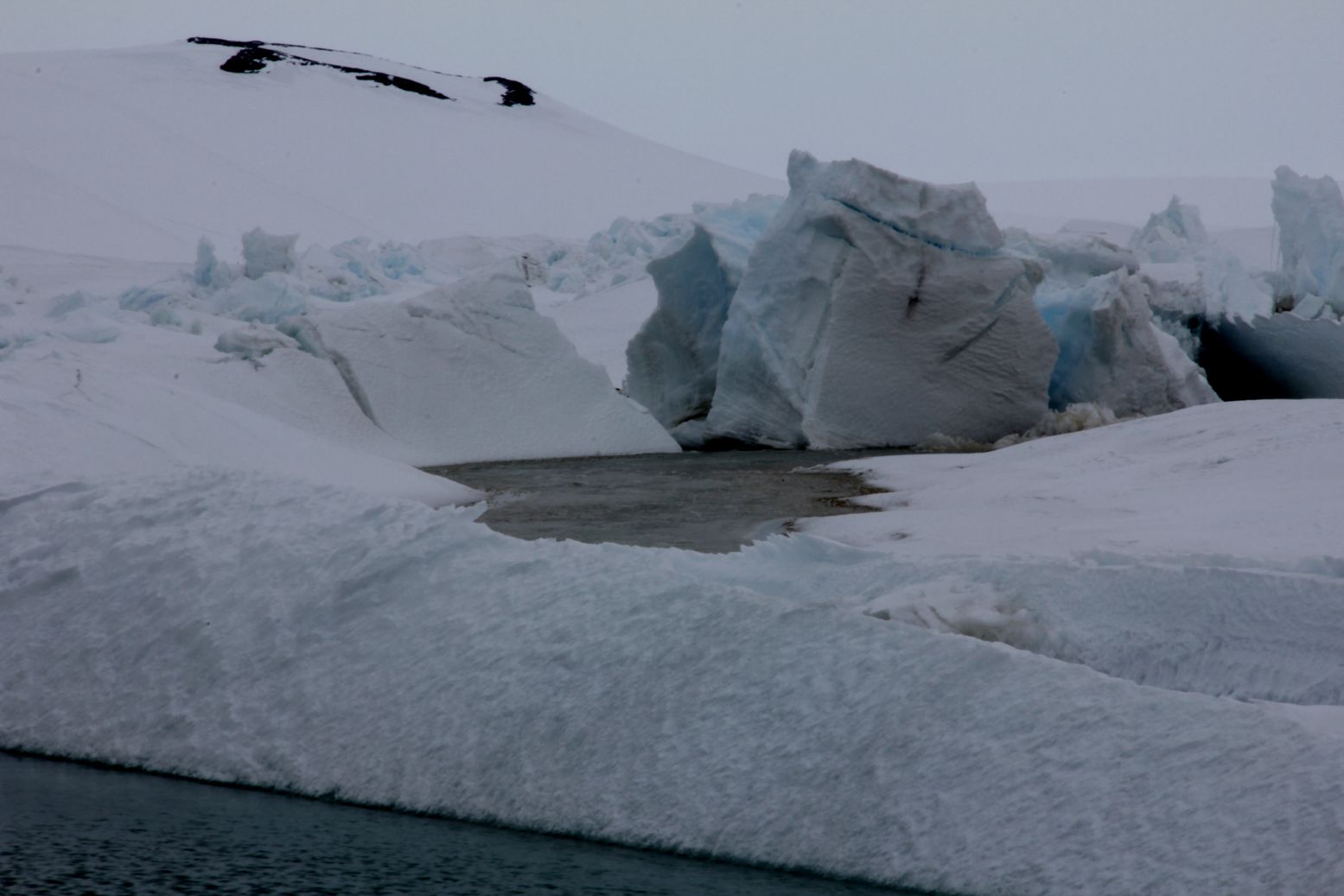 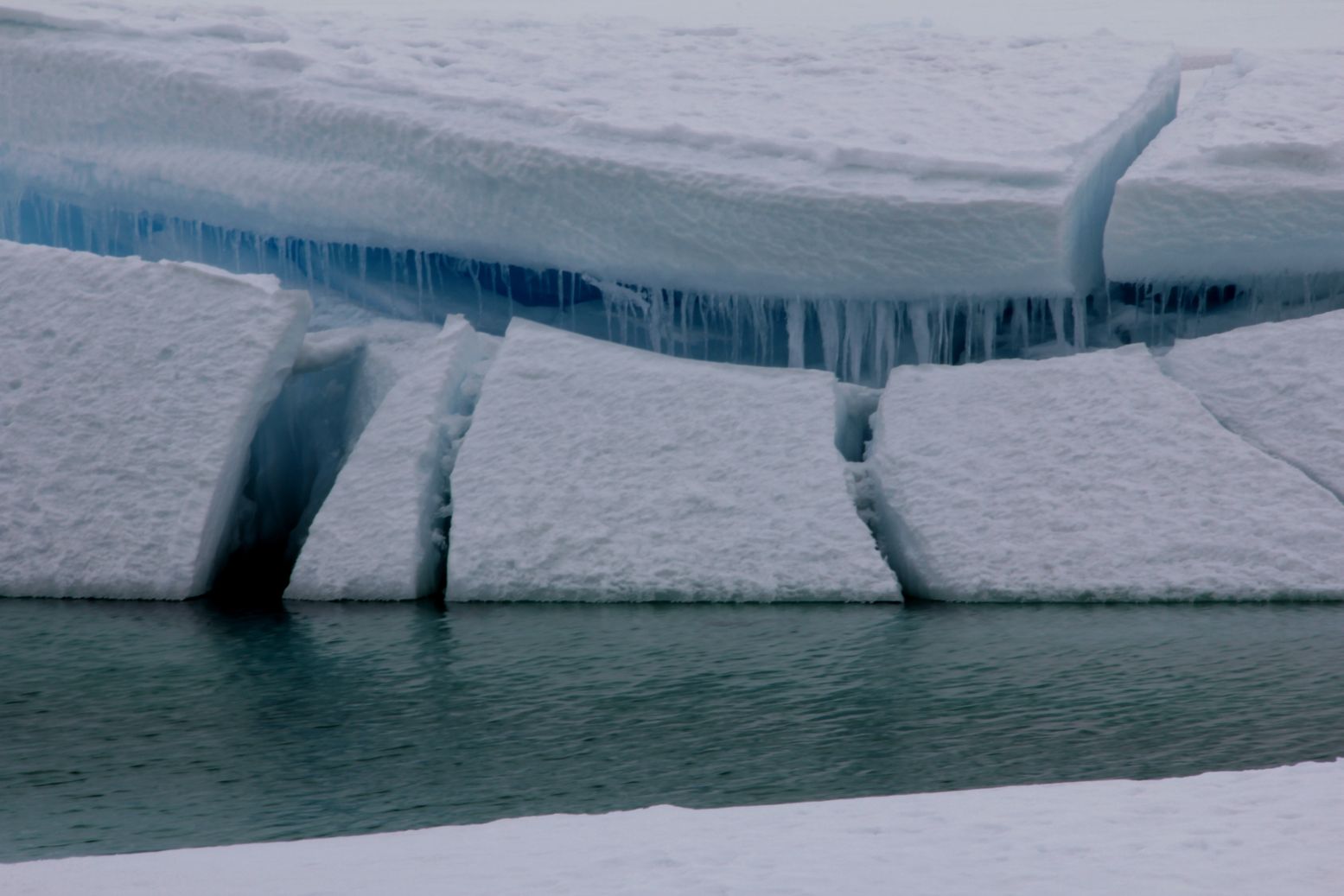 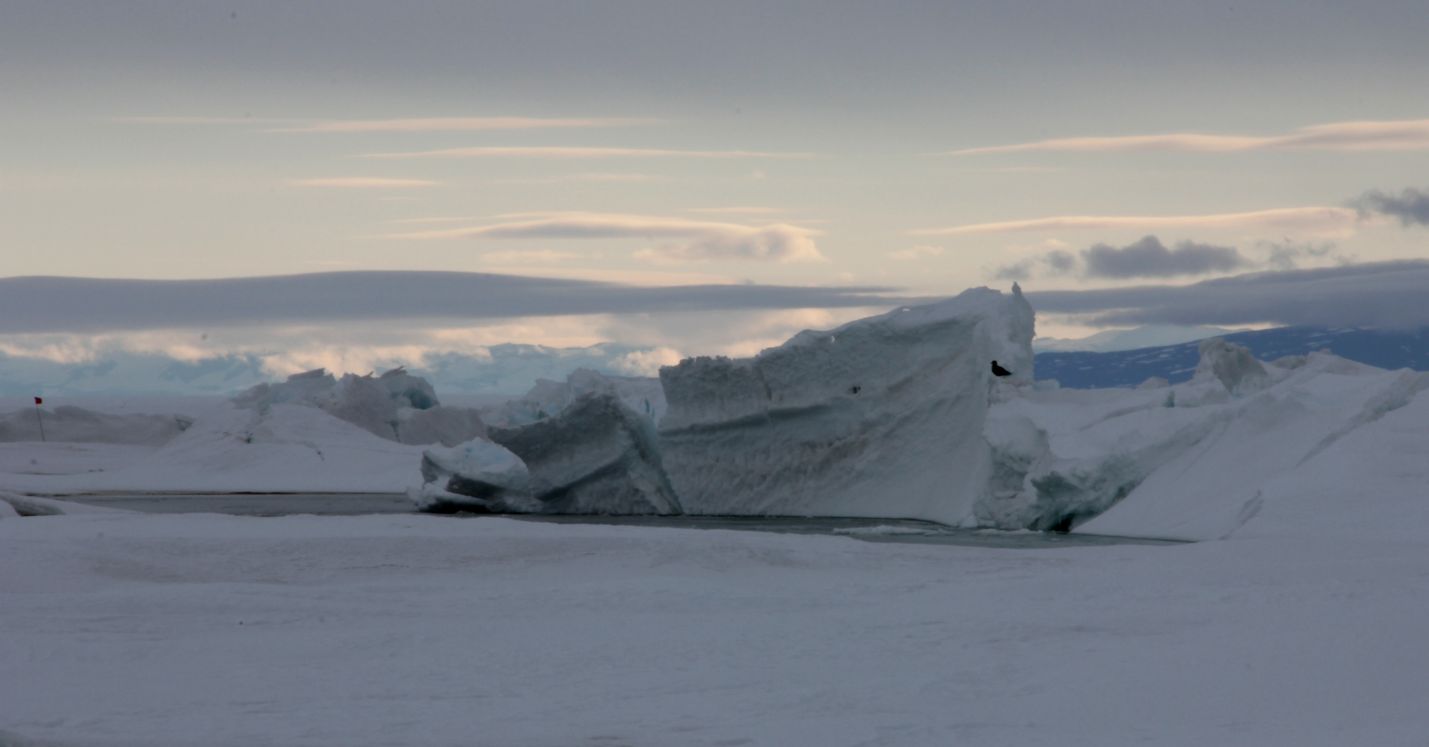 Posted by birgit hassler at 4:56 PM No comments:

Got some of the information from Wikipedia again...
"Discovery Hut was built by Robert Falcon Scott during the Discovery Expedition of 1901–1904 in 1902 and is located at Hut Point on Ross Island by McMurdo Sound, Antarctica. The hut is located on Hut Point, about 300m away from McMurdo Base."

I learned that the hut was built by an Australian after a desert hut design: it keeps the cold in nicely.  :)
So when you go in, the temperature inside is very often lower than the temperature outside. You are only allowed inside the hut with a trained hut tour guide. I was lucky that a guy who came to McMurdo from the Pole with me is trained, and had some time to show me around. So it was only the two of us in the hut, and I could take all the time in the world to take pictures and hang out.

Inside the hut there is still furniture, supplies, clothes and things from the times of the Discovery Expedition, and expeditions of later years. Some of the cans still contain food (which you could probably still eat...). 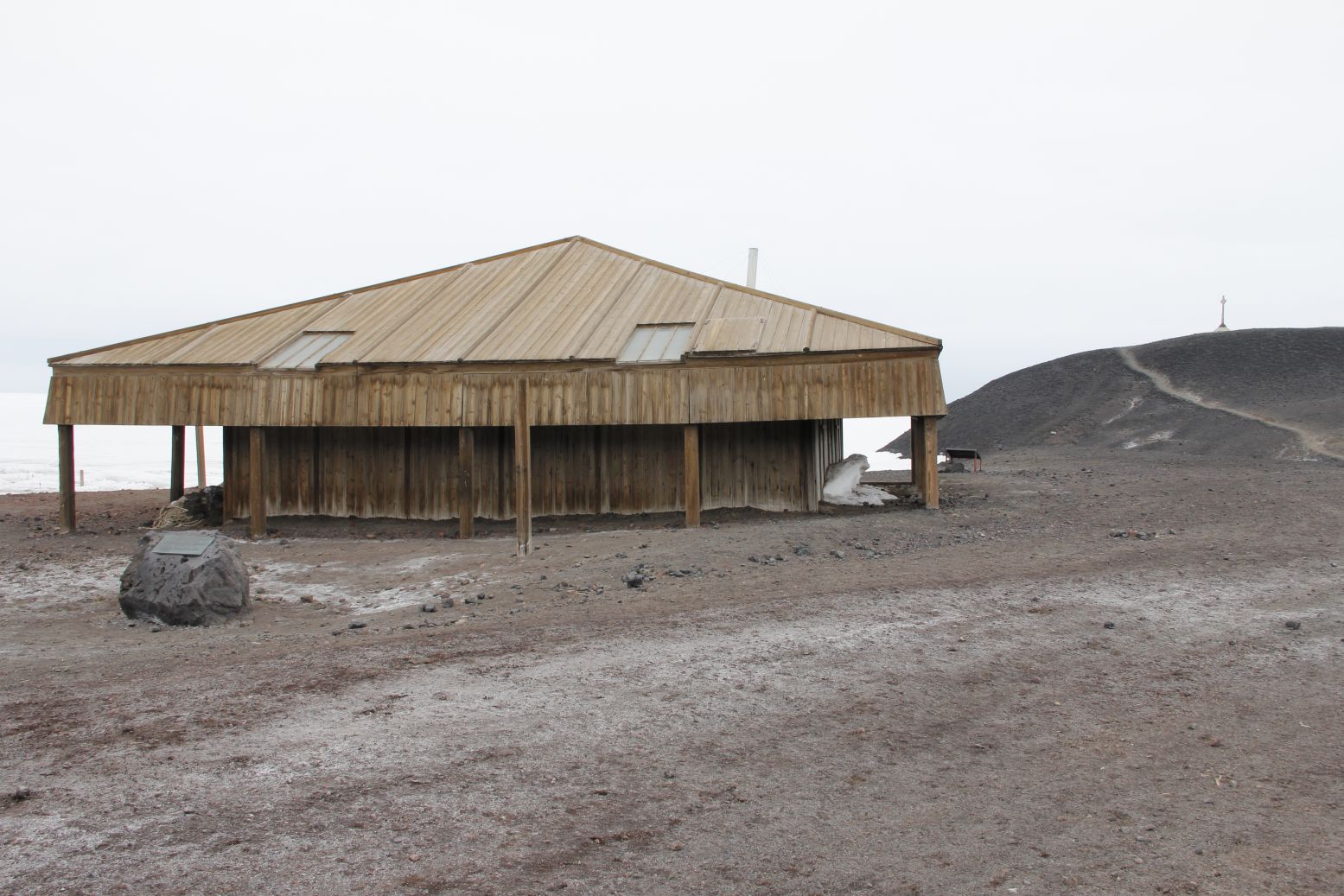 Discovery Hut from the outside. It is basically a building with a square floor plan. In the background (to the right) you can see the cross of Hut Point. 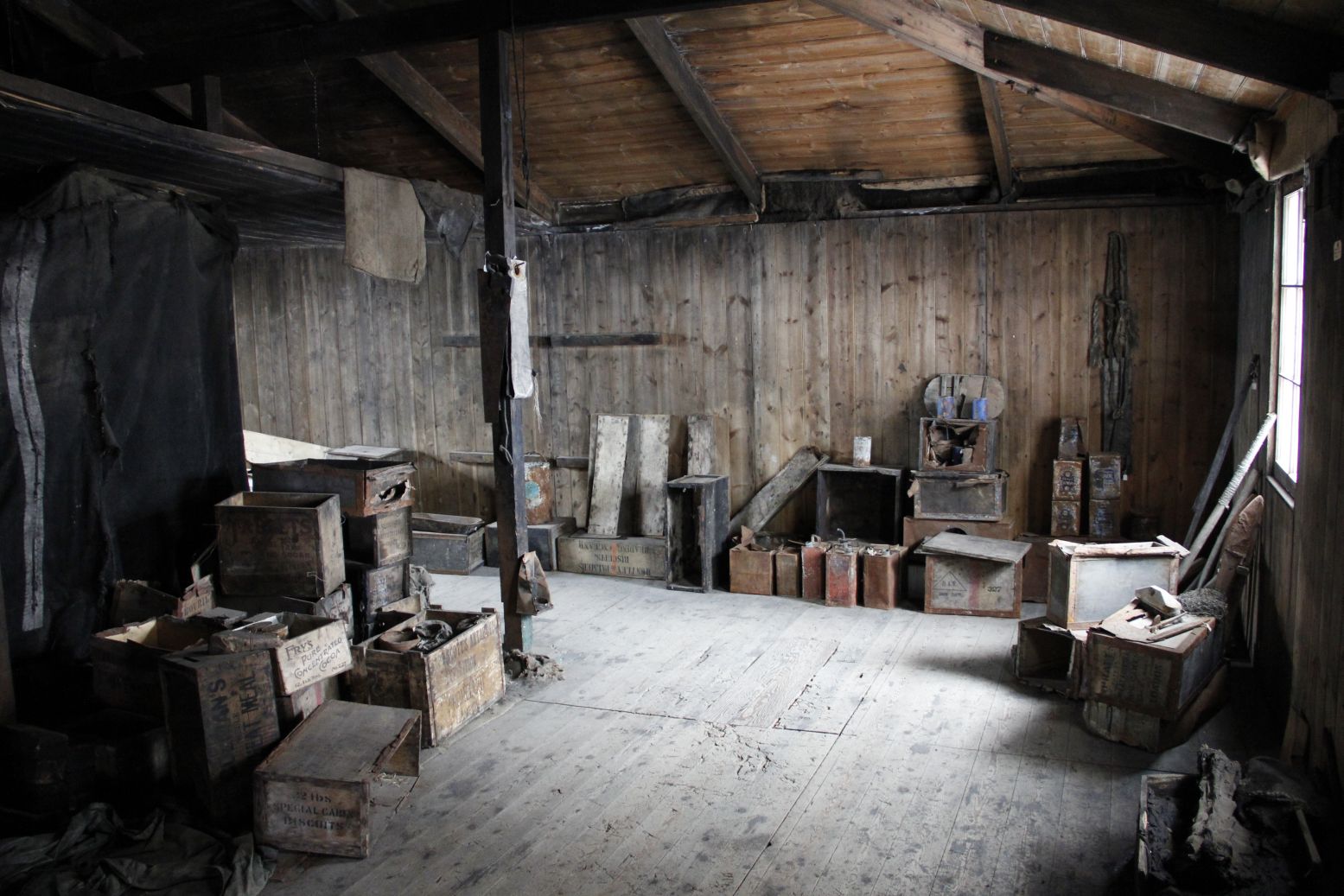 The inside of the Discovery Hut, the first room. You can see all kinds of supplies, and in the front to the right some dead seal. It's blubber was used to heat the stove. 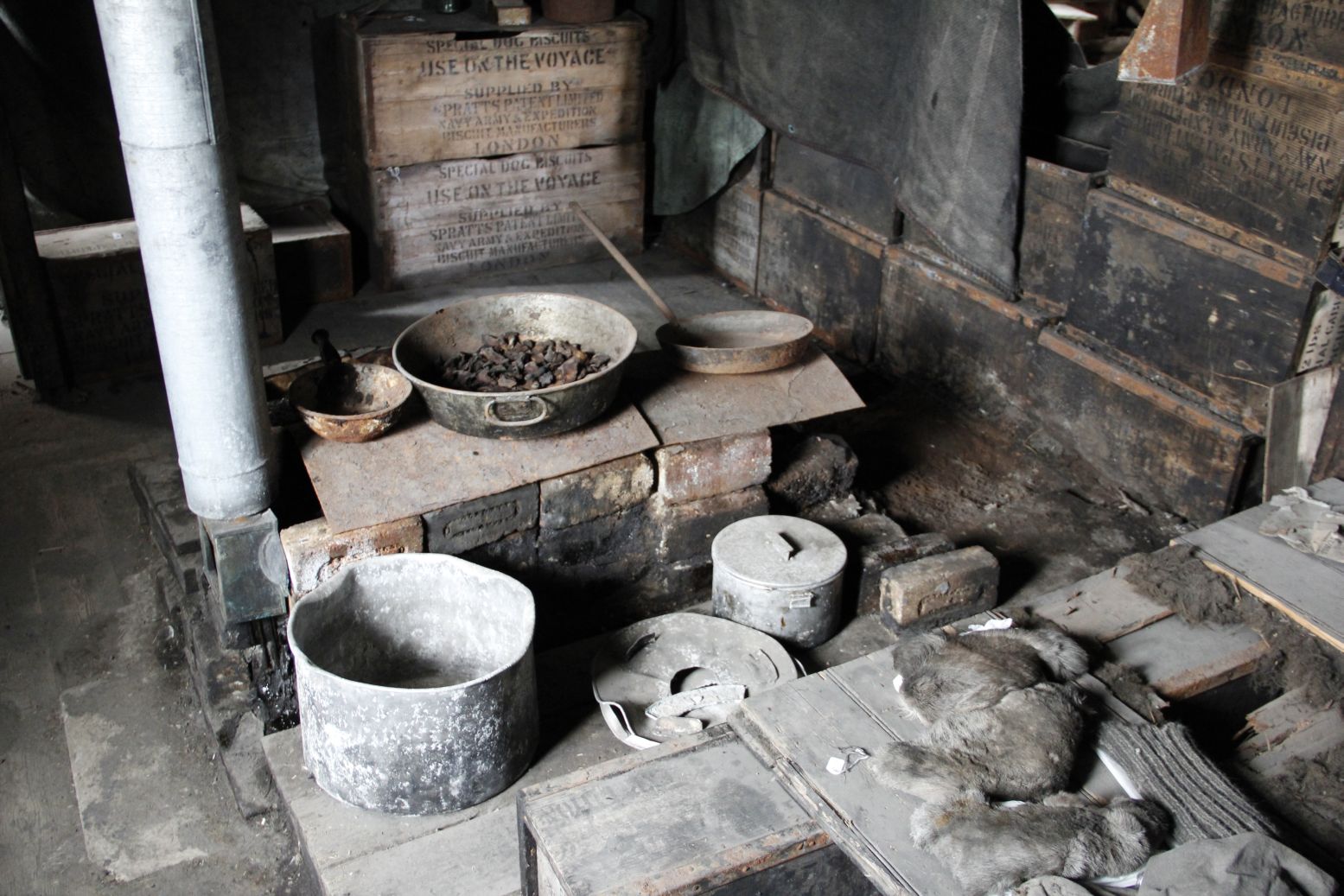 The stove, fired with seal blubber. Used to cook and heat the hut. 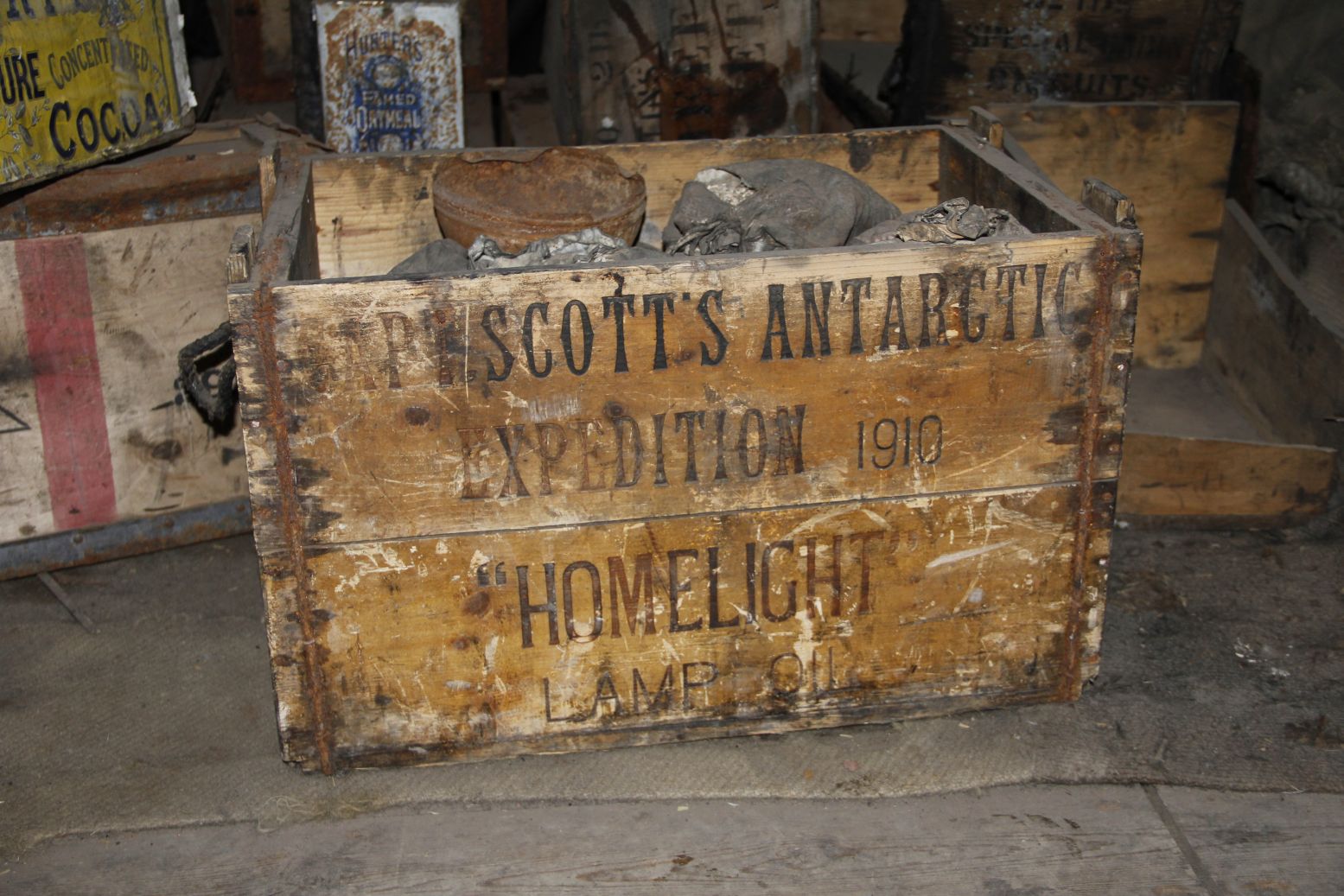 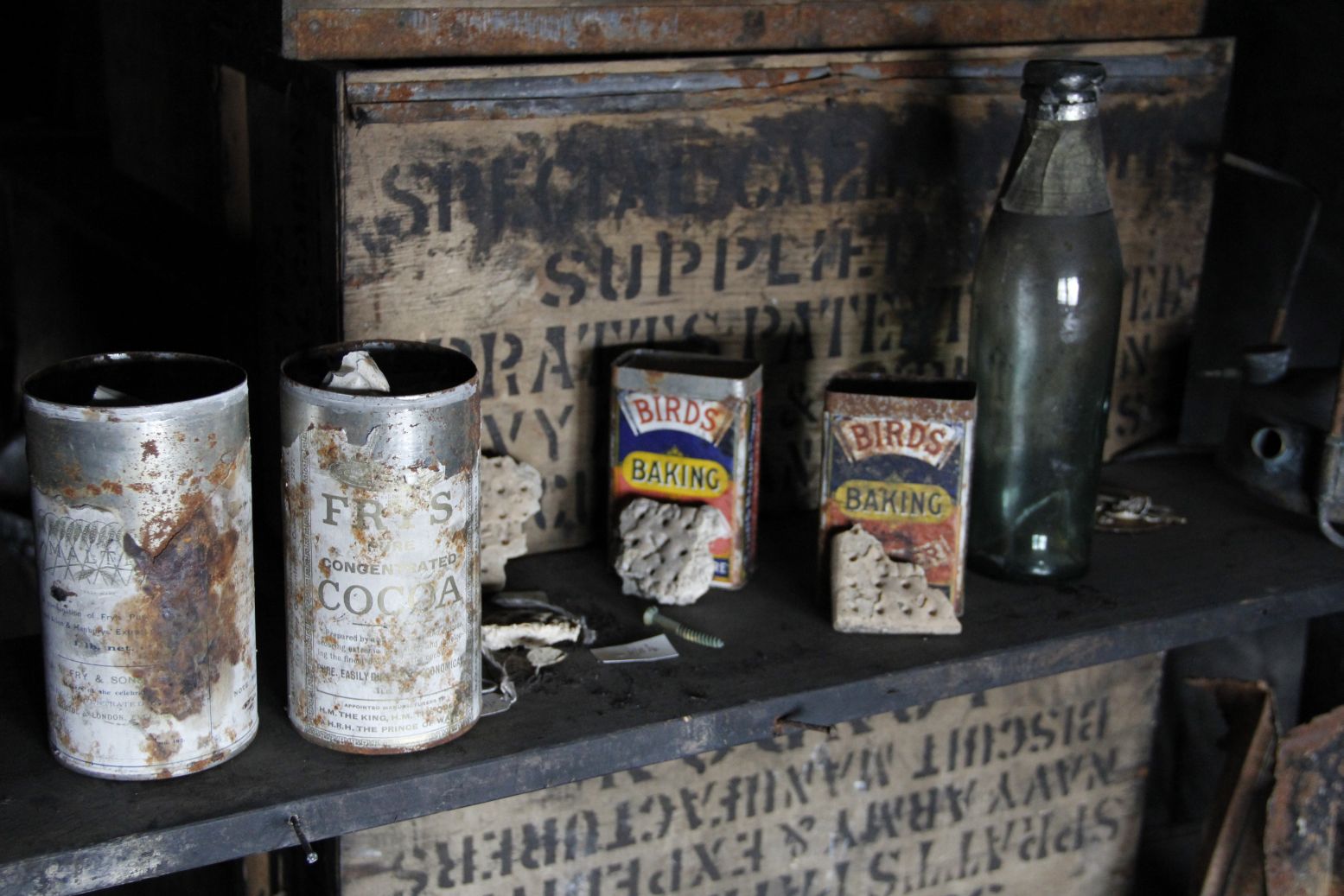 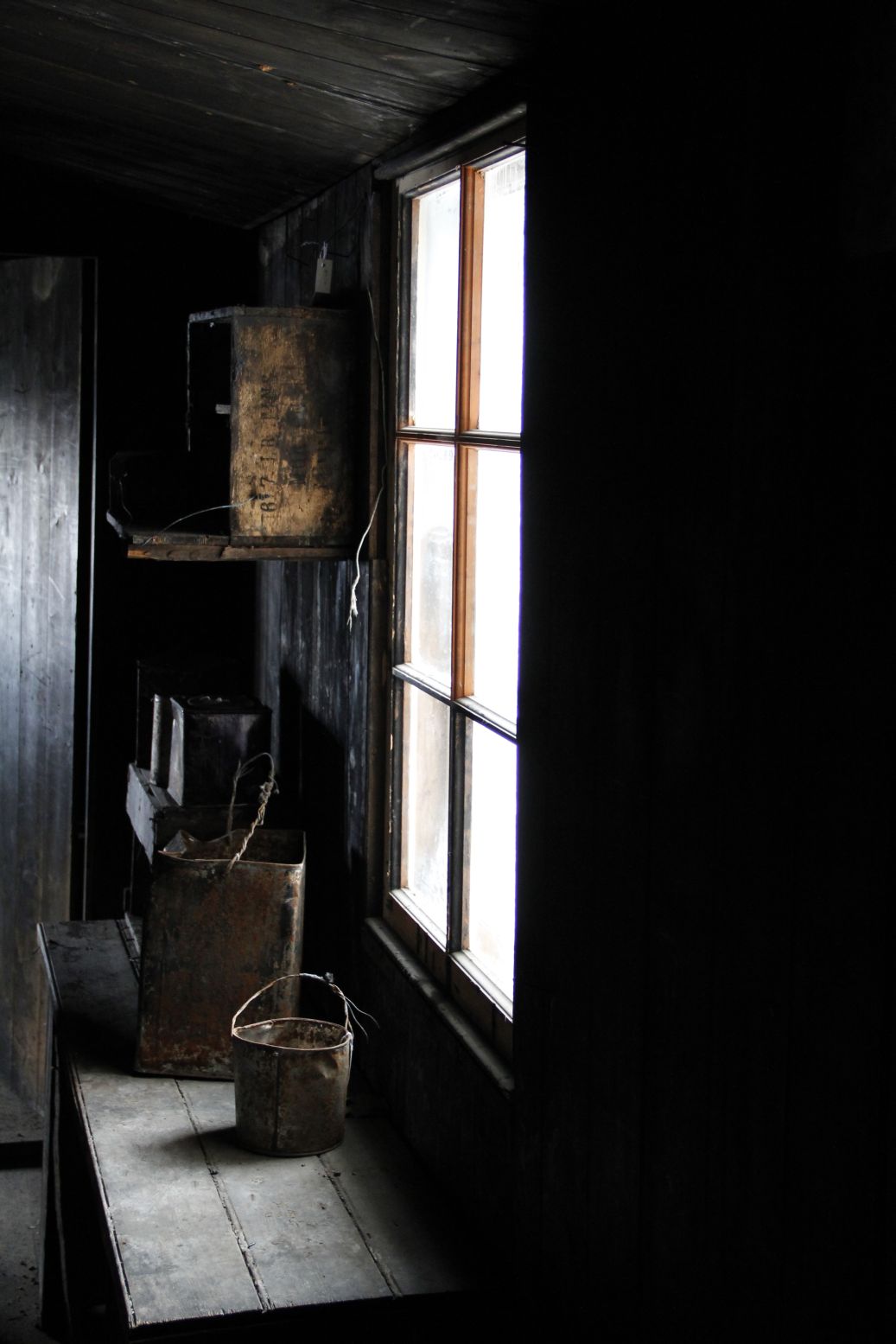 Posted by birgit hassler at 3:53 PM No comments:

Ok, I promised some more pictures of my last days in Antarctica. I thought I start with a nice overview over the station McMurdo. Compared to the Pole, McMurdo is HUGE. During the time I was there, there were about 900 people there (with roughly 25% of them being female). After being exposed to about 160 people at the Pole, the masses of people in McMurdo were almost overwhelming.

The whole "town" is way bigger than South Pole. Many different houses, a port, hiking trails, vehicles etc. It almost feels like a mining town rather than an Antarctic station. And somehow to me it felt almost like a let down. So different than the whole atmosphere at the Pole. Close by (just around the corner, basically) is the New Zealand station "Scott Base". So much smaller, and really pretty.

Since I got stuck there for about two days, I had some time to look around, and enjoy some of the entertainment possibilities. On the second day, I hiked up Observation Hill, that is located directly next to McMurdo. A nice hike up, but since I only had borrowed shoes (my own shoes were already checked-in and not accessible for me anymore), the hike down was really not pleasant. At least the view was great that day, as you can see on the pictures! 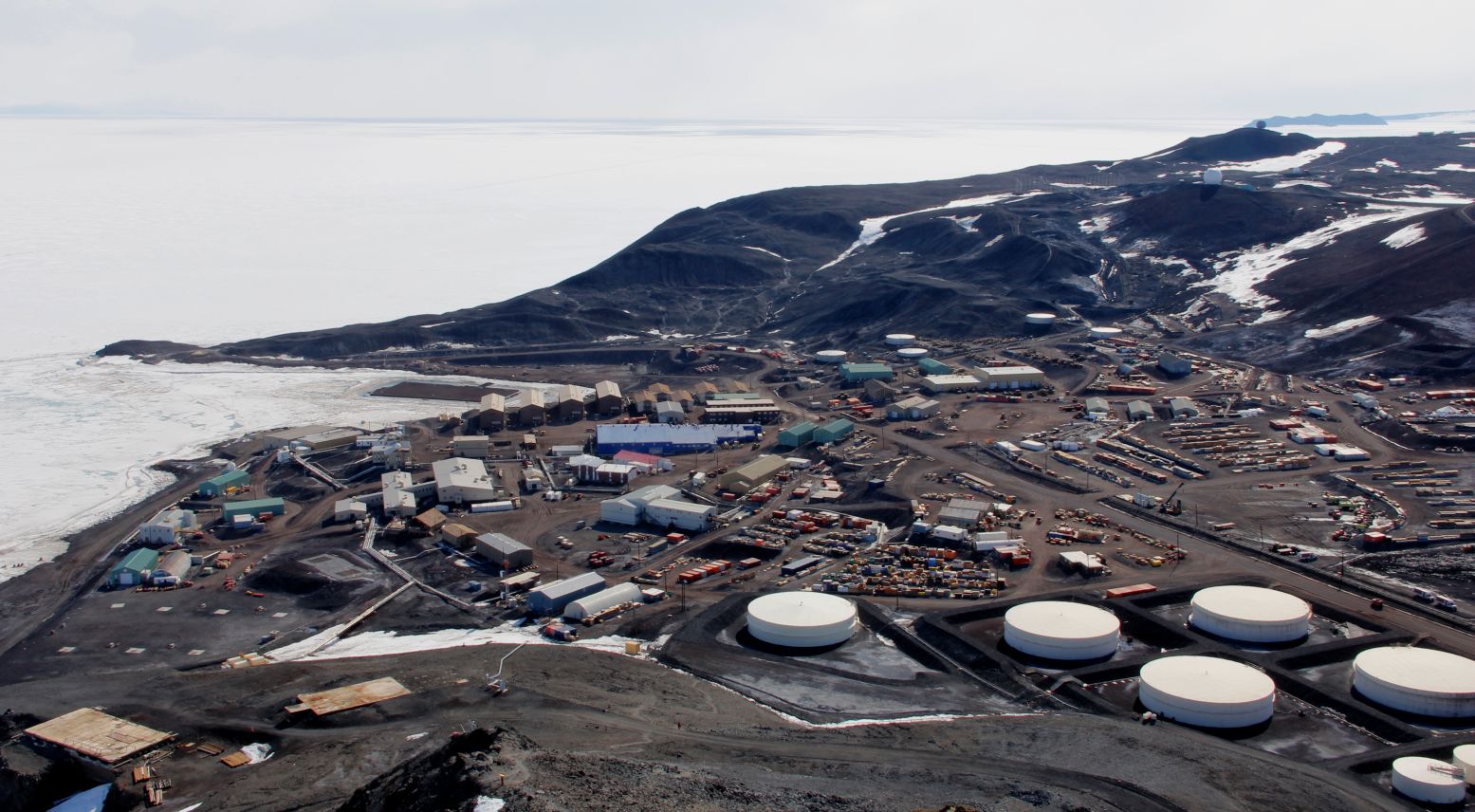 McMurdo station (or "town") as seen from top of Observation Hill. You can see that it is quite a lot bigger than South Pole station. 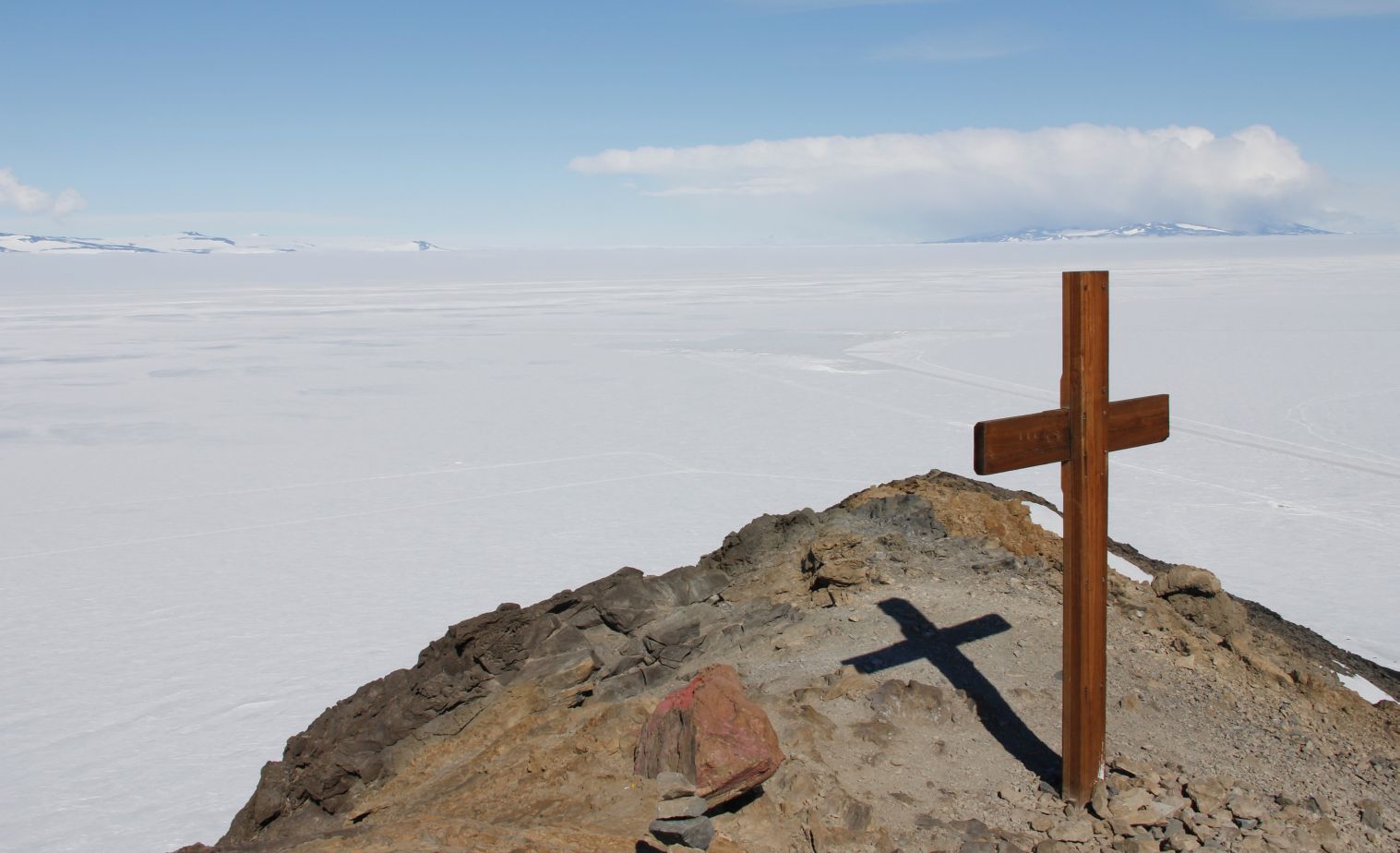 Top of Observation Hill. In the background you can see the Ross Ice Shelf (I think), with "White Island" on the left and "Black Island" on the right. 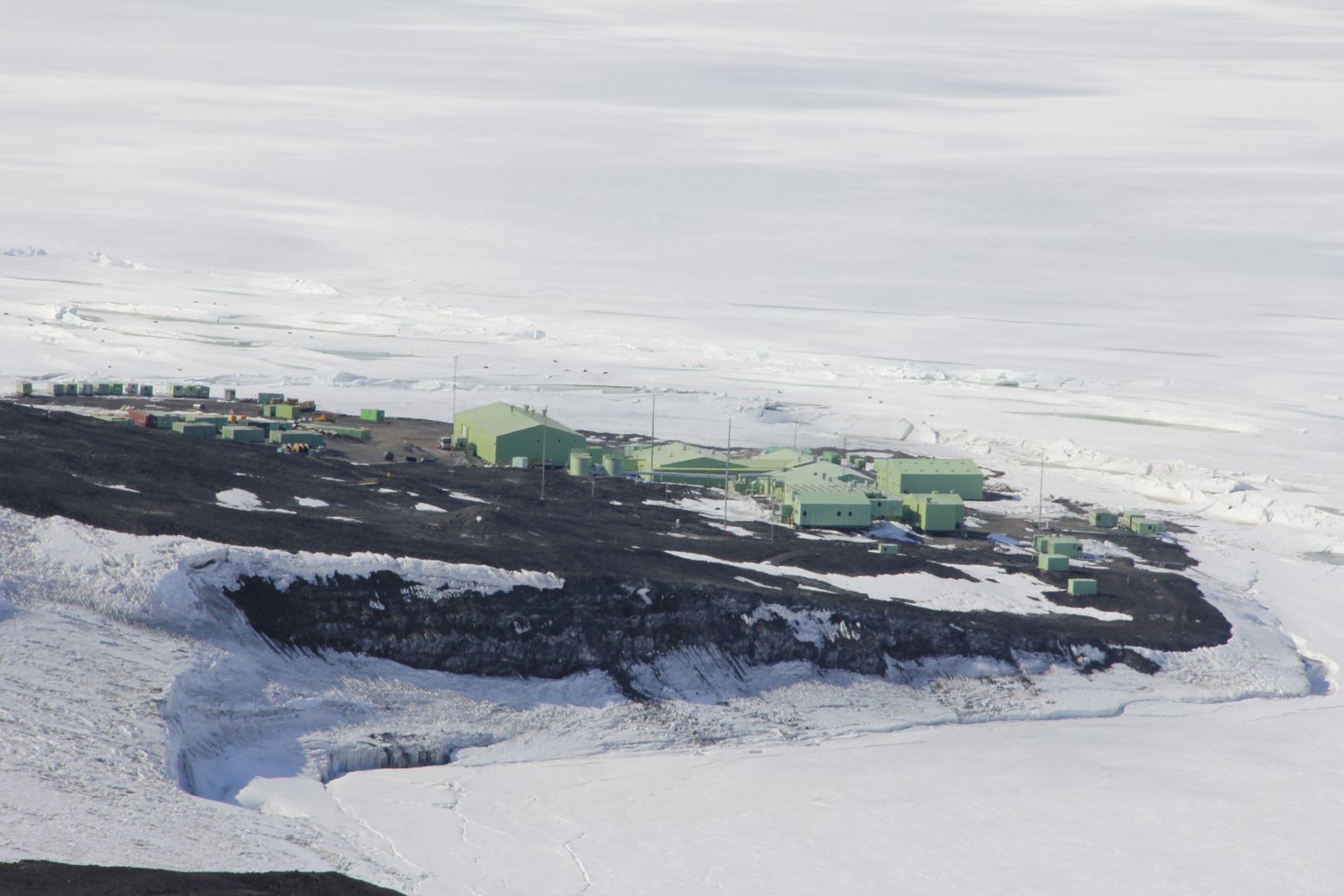 Scott Base, the New Zealand station. Just on the other side of Observation Hill. And really close to pressure ridges which you can see in the background.
Posted by birgit hassler at 3:26 PM No comments:

I just had to post this picture before Christmas (although I should really, really finish some work right now...). But what would be the point of posting a Christmas tree AFTER Christmas?! 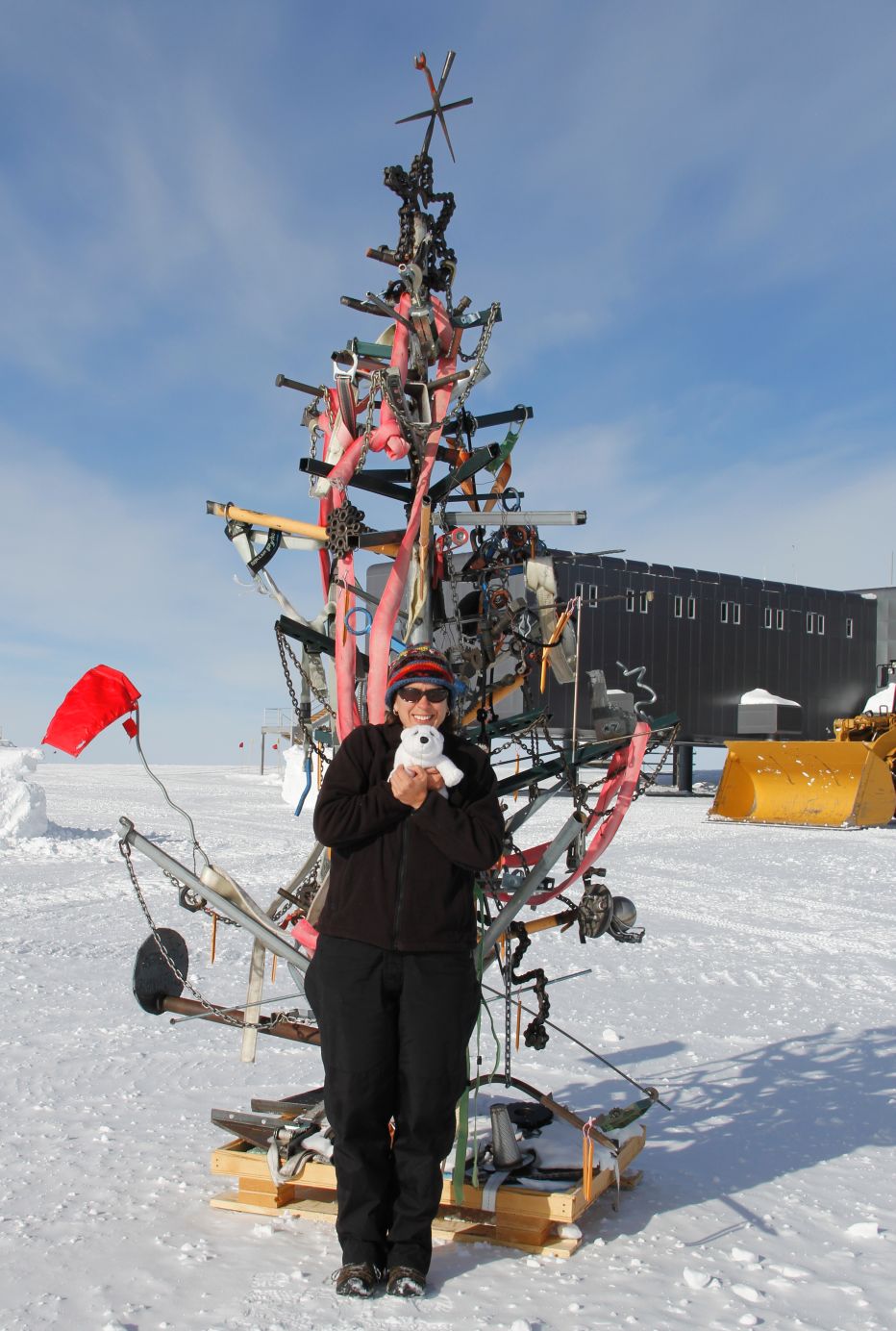 That is the Christmas tree outside the South Pole station. It is built from all kinds of different machine parts, steel thingies, safety bands, and other interesting things. And yes, there are POLAR BEARS in Antarctica!  :)

Merry Christmas!!
Posted by birgit hassler at 1:37 PM No comments:

I made it! All the way back to New Zealand!

With probably the last flight out of McMurdo before Christmas. You can only barely imagine how relieved I was when I was on the plane in McMurdo and we really, actually departed.

Don't get me wrong, staying in Antarctica in whichever place is awesome. And especially if you have good views around and things to do. The thing that drove me crazy was the constant uncertainty IF there would be a plane, and when it would leave. That information changed about five to six times a day, and every time I hoped it would be the last change. And was disappointed then. I could not even sleep in for very long since I had to check at about 5am if the flight was still on or not, and if the departure time changed.

But at least we had a really nice ride back home, when it finally showed up on Sunday early morning: we flew in an Airbus! That took only 4.5 hours to get back to New Zealand, and we were about 18 people on a plane with at least 120 seats. So LOTS of space! And the pilots were nice and let us come to the cockpit to see the incredible views of Victoria Land.

When I got off the plane in Christchurch and finally made it through customs, I was greeted by a good friend with whom I will travel here in NZ now for a while.

I will post some more pictures and stories from my last days in Antarctica around New Years (when I will be back in the reach of an Internet connection). Merry Christmas to everybody! Have a few wonderful days off!
Posted by birgit hassler at 1:28 PM No comments:

I arrived at McMurdo yesterday late afternoon, after getting the flight from the Pole around noontime. I had high hopes that everything would work as planned, me arriving in McMurdo, having some time to see the most important sights (Scott's Hut), and then me leaving today to get to Christchurch.

It was a good plan, and it looked like it would work out. I got a bed (in a dorm, but nobody else is there right now), got dinner, went to the souvenir shop, and then packed my luggage again to do the "bag drag". That means you carry ALL you luggage to a building where they weigh it and put your checked luggage on a palette for the flight you are supposed to leave with. Then you hop on the scale with all the ECW gear and your carry-on luggage, and they record your weight. To make sure that the plane has enough petrol to transport everybody and their luggage.

So after I got rid of most of my luggage again, I wanted to walk over to Scott's Hut to have a look around. I was supposed to be at the passenger pick up place at 3am to get the flight in the morning. However, I met one other Polie who is supposed to fly out to Christchurch on the same flight as me, and we decided to drink some wine instead (instead of me going to Scott's Hut). And while we were sitting in that coffee shop here in McMurdo, drinking our wine, congratulating ourselves that our travel plan would work so well, the barista in the coffee shop tells us that the Airbus we were supposed to leave with, had to turn around to Christchurch. Because of weather issues. Which meant that our flight to Christchurch got cancelled. We heard rumors that there will be a flight with an LC-130 instead, but not all the people from the Airbus flight would be able to get on it. And they would post more details at 11pm. So we waited around until 11pm, and found out then, that we were both NOT scheduled to depart with the LC-130. Which means we are stuck in McMurdo for at least one additional day. Bummer!

Well, that gave me the possibility to sleep in this morning, and walk around McMurdo to take some pictures. Most likely I will wander over to Scott Base (the NZ station close by) in the afternoon, and have a guided tour of nice pressure ridges in the evening. And if everything works out well, me and my colleague from the Pole will be on the Airbus flight tomorrow morning. Passenger pick-up will be 2am then...
Posted by birgit hassler at 5:02 PM No comments: